Right he is who said “Disability should not Disable You”. At least is the  21st century digital world,  disability is not at all a constraint. The story of Ian Burkhart, now 24 depicts a story that tells about the boon of technology in his life. A paralyzed Burkhart got paralyzed in the  2010, after diving into the  wave of a shallow water. Unfortunately, the  accident left him  with the  least use of his arms and literally no use to his hands.

Thanks to the  scientists  at Ohio, that they had successfully equipped Burkhart with a system that enables him to get full control in his right wrist and hand with his thoughts. 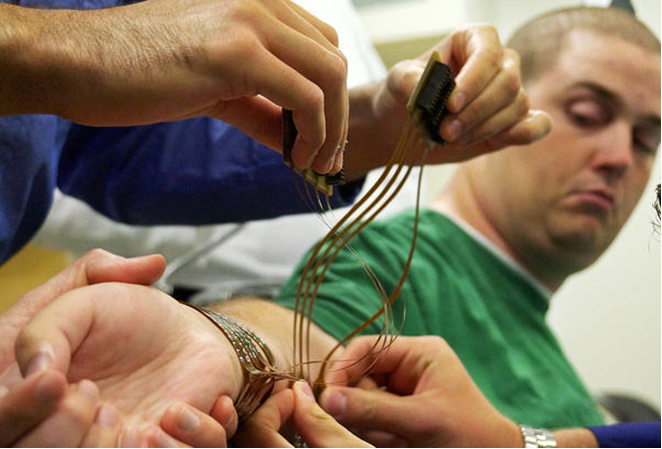 According to the victim Burkhart, the first times are always enchanting and he has also added that the feeling of moving his hand for the first time is simply inexplicable. It’s been said that the briefing was held to announce a study in this week’s issue of Nature, which describes Burkhart’s progress since he started using the system.

As per the current development,  Burkhart can now perform tasks like pouring water from a bottle, grasping small objects, and swiping a credit card through a card reader. He can also control the movement of individual fingers.

The entire process is pretty complicated. However, it’s  featured in the patient and you also need to check out. With the help of technological advancement, you can easily check intercepts and decodes electrical signals from the brain

In addition to that, Burkhart is having a tough time and is taking keen interest in household skills like pouring water from a bottle, taking notes of the small objects, and swiping a credit card through a card reader. At the same time, he can also come  movement of individual fingers.

According to Chad Bouton,”We’re actually routing them around the spinal cord injury and then reinserting those signals into the muscle”.  He has also added that the study’s first author and vice President of advanced engineering  will be  Feinstein Institute for Medical Research in Manhasset, N.Y.

As the scientists have said, the latest technology that enabled Burkhart to workis actually operated via electrodes that are planted in his brain. It’s almost like a computer interface attached to his skull, and high quality electrical stimulators fitted around his forearm. Immediately after the implementation, BurKhart can easily grasp objects , but due  to his disability could not hold that object for long. However, with rigorous practice, things are coming in control.

Just after its invention, the technology has received quite a good deal of media attention. After all, it’s helping out a number of paralyzed people perform their daily task just by using their thoughts. Isn’t it a breakthrough invention of the latest century? Learn more about how to spy whatsapp messages