I woke up yesterday morning and looked out of the window to see a fairly heavy frost on the ground. It didn’t surprise me at all as it had been a fairly cold evening the day before but it told me that winter had very much arrived. We’ve been very lucky this year in that winter never seemed to be coming and even on the TV news they were commenting about it being one of the warmest years on record. 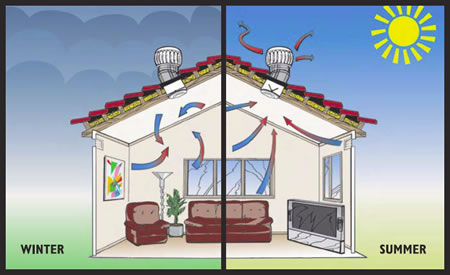 One of the things with winter though is that we tend to keep our doors and windows closed tight and that isn’t good as houses need to breathe just like we do. If a house doesn’t breathe then air becomes stale and moisture gets trapped in which can cause problems with condensation and mould.

I’m a bit of a DIY enthusiast so I intend to do the job myself and went online to see what was available. Firstly I was surprised how little a shower fan could cost. For example Edwardes Bros do an inline shower fan for under £18 including VAT. An inline fan has the advantage that I do not have to knock a hole through the wall. I can take it from the ceiling above the shower and then out through the eaves without too much trouble. The shower fan can be wired into the lighting circuit so access to a power supply is straightforward enough but the fan MUST have an isolation switch fitted, either a corded switch within the bathroom or a wall mounted one outside the bathroom. Both of these are also available from here and so I will order one from them at the same time as I order the shower.

Thankfully, in a few days I will be able to leap straight out of bed and into the shower without feeling the cold. Hurray!