Liquid Nitrogen is used for a lot of things. Since its boiling point is at -196oC, it is used as coolant for computers, as a way to remove unwanted skin and precancerous cells and in scientific studies to see the effect of extremely cold temperatures on materials. 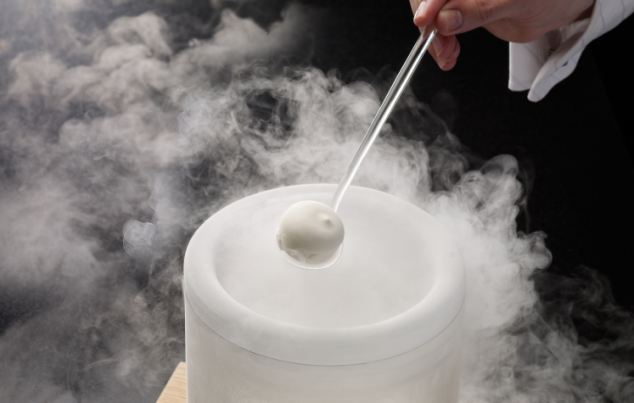 There were times when people wouldn’t stop talking about a “Master Chef” episode when a chef pulls a liquid nitrogen technique. It used to be so awesome that there will be a lot of cheers. Nowadays, cooking with liquid nitrogen is nothing but a normal occurrence. With the ability of liquid nitrogen to freeze just about any ingredient, it is becoming a staple in commercial kitchens.

Professor Peter Barham from University of Bristol’s School of Physics says that liquefied gas can cause frostbite or cryogenic burns if not handled or used properly. He said that using liquid nitrogen in cooking is fine as long as safety measures are put in place. He also said that it is also important that all of the liquid has evaporated before the food or drink will be used.

Studies about ingesting liquid nitrogen says that a mouthful of liquid nitrogen will bring catastrophic damage if ingested. Like any other thing or substance, everything should be consumed or used in moderation or using the prescribed amount. The use of liquid nitrogen in cooking by professionals should not elicit fear. It is an emerging cooking technique that makes food preparation more interesting. Food industry practitioners are well aware of the right amount of liquid nitrogen to be used.

Using liquid nitrogen is not actually a new idea. In the 1800s, there were reports of ice cream made with liquid nitrogen. In today’s world, however, we see it used by innovators of the gastronomic world. It is now a common practice to instantly freeze food and drinks creating an exciting cloud of vapor when exposed to air. Even if it’s been around for a while, you will still be in awe of how impressive this technique is.

Like many new technologies, more people and food businesses are making cooking with liquid nitrogen a mainstream practice. Catering services are now using liquid nitrogen for their desserts and ice cream stations. What caterers do is they add liquid nitrogen to ice cream mixtures while the guests observe the procedure. Guests are able to watch how the ice cream is prepared fresh right before their eyes. They are now using this new food concept to pique the interest of their guests and to give their clients a new interactive culinary experience.

Written by bleu events, one of the top caterers Columbia, MO has to offer.