A distressingly familiar pattern of built up areas suffering heavy flash flooding has caused Harrow Council to undertake a drain clearance operation in a busy street to try to alleviate road, pedestrian and rail disruption.

In late July drivers using Station Road found themselves maneuvering around a large drainage tanker positioned under the railway bridge clearing the drains after Harrow council took their recent action. They hope this will help the drains under the London borough deal more effectively with heavy rainfall in the future; something that’s becoming a widespread issue in built up areas elsewhere in the capital and other UK towns and cities.

North Harrow’s Station Road has been affected more than once in recent times through flooding caused by heavy bouts of rainfall – including two disruptive floods in successive months. Rain water gathered under the railway bridge and flooded the road making it impassable for traffic and North Harrow underground station was underwater and closed for a day.

Local businesses suffered major disruption. A parade of shops near the station was severely hit by the flooding in June; a flower shop had water coming in “like a waterfall” according to the proprietor, and another store feared they’d have to replace some of the waterlogged wood behind the walls. 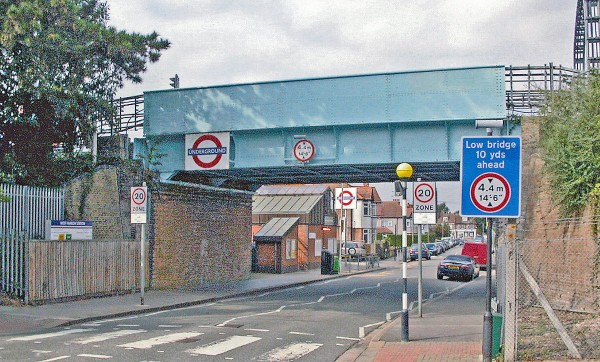 In general, rainfall patterns are altering due to climatic changes. The tendency is for more rain to fall in shorter timeframes meaning heavy sudden demands are being placed on already hard pressed drainage systems.

Another reason for flooding is the increase in hard surfaces as larger towns and cities expand and more previously absorbent natural surfaces are now covered with concrete, tarmac and buildings. This means rainwater simply runs off the surfaces straight into the drains instead of some being absorbed gradually and naturally into the ground.

Overall, these two factors are putting around 5 million UK homes at risk of flooding.

Some local businesses affected by the flooding were critical of Harrow Council’s perceived inertia prior to arranging the drain clearance work. Although the Met Office had warned of extreme weather warnings, the shop business owners near Harrow station were disappointed not to hear anything from their local authority in the aftermath of the initial floods, but were pleased to see the subsequent drain clearance work commence.

There again, one or two local business owners are concerned that the problem is more deep seated than the drains requiring a clean – they feel the drainage is simply inadequate for the changing demands being placed on it.

Harrow Council countered this concern by saying further actions are in place. The drains are being cleared as far as where they connect with a Thames Water public surface sewer, and they are liaising with the capital’s water authority to clean and check their drainage network.

They’re also putting a flood alleviation scheme in place in nearby Headstone Manor in conjunction with the Environment Agency to help improve flood protection levels in the North Harrow area.

Fraser Ruthven is the Marketing Associate for London Drainage Facilities, one of London’s leading drainage companies. London Drainage provides a wide range of drainage diagnostic and repair services in and around London.

0 0 0 0 0
Previous : How To Spot And Protect Trees From Lightning
Next : Real Estate Agent Mississauga Help In Finding Rental Property