Everybody likes to think of themselves as a smart, collected individual, but that simply isn’t true for some people. Here are a couple of people that managed to have unthinkable accidents with their garage doors.

Everyone loves their pets, but not all of us would go to great lengths to save our cat. Well, one man would! Let’s call him Dave. You see, Dave was a young man that didn’t hesitate to try to help his cat get down from the top of the garage door when she got stuck.

He called out to her, tried to lure her down with treats, the whole nine yards. Naturally, Dave was left with only one option; climb up to the cat and bring her down! If you’re imagining that this went horribly wrong, then you are obviously a bit brighter than Dave.

Shockingly, Dave’s garage door could support the weight of one cat, but not the weight of a full-grown man. When he climbed from his ladder onto the garage door, it immediately dented down under his weight. Tentatively, he kept going until, as luck would have it, the entire garage door fell down.

Thankfully, nobody was injured. And that means tha the cat was completely fine, but Dave had to have several stitches and was treated for a broken arm. We can only assume that he now prefers dogs. 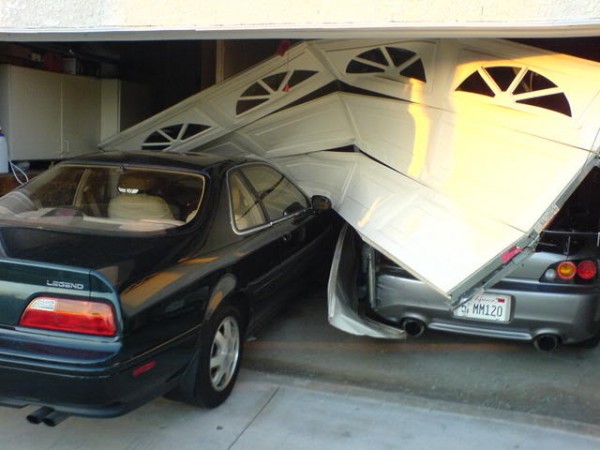 While high school cheerleaders aren’t always known for being the brightest of the bunch, one girl made an especially dim-witted move. It was Angela’s senior year and as the new head cheerleader, she had a lot to prove. Rain or shine, she always practiced her routine, and on this particular day, it was rain.

Because of the nasty weather outside, she decided to practice inside of her garage. Smart reasoning. What was less smart, however, was deciding that this was the right day to practice her baton routine.

It was probably mildly inconvenient to keep hitting the raised-up garage door over and over with her baton when she threw it, but Angela persevered through it. Until, finally, she hit it in just the wrong spot one too many times.

Her garage door fell halfway off of its railing. Thankfully, the other half held up so the entire door did not collapse on top of her. On the flip side of that, the half that did fall managed to swing right into Angela and send her flying across her own garage. In that moment, we imagine that she regretted being so skinny. With a few more cheeseburgers, she may not have been tossed aside so easily!

Not to worry, Angela is fine. One minor shoulder injury later and she was back to her duties as a cheerleader. Presumably, though, she decided to let someone else take up her old baton.

These stories just go to show that anybody can have the unfortunate luck to make one or two bad decisions and seriously hurt themselves. Particularly with garage doors. Be smart, be careful, and never ever mess with your garage door!

G-Brothers Garage Doors is a Colorado based garage door repair and service company; they repair, install and replace garage doors – and everything in between. With thousands of satisfied customers, they can tailor our garage door installation and repair services to fit your individual situation and needs.

0 0 0 0 0
Previous : What Type Of Martial Arts Is The Best For Your Kids?
Next : Business Phone Number Do We Really Need Them