Partygoers heading to Slam Dunk Festival this Bank Holiday weekend can expect to see the festival’s ‘biggest and best’ ever line-up.

This Bank Holiday weekend sees the 10th anniversary of the hugely popular Slam Dunk festival, and over 40,000 music lovers are getting ready to party to one of the festival’s best ever line-ups.

Originally launched in 2006 as a one-off festival on Leeds’ Millennium Square, the annual Slam Dunk Festival has grown dramatically over the past ten years. The punk and metal festival is now spread over three days across the Whitsun Bank Holiday weekend, taking in three separate locations – Leeds, Birmingham and Hertfordshire.

The 2016 festival arrives at the University of Hertfordshire (Hatfield) on Bank Holiday Monday, 30 May, following shows in Leeds City Centre on Saturday 28 May and Birmingham NEC on Sunday 29 May. 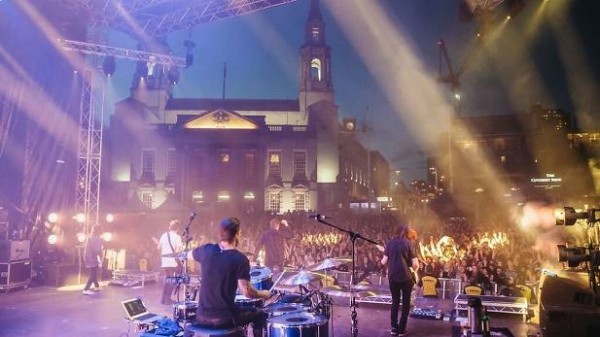 2016 is the festival’s 10th anniversary and organisers are promising that this year’s event will be bigger and better than ever, with over 40 artists playing across a range of indoor and outdoor stages, and a capacity crowd of more than 40,000 music-loving partygoers.

As always, the festival will boast an eclectic and impressive line-up of pop-punk, ska punk, emo, metal and hardcore punk acts, combining well-known names with smaller, up-and-coming artists. This year, in honour of its anniversary, the festival will be welcoming back some Slam Dunk favourites, including Of Mice and Men, Four Year Strong, Heart of a Coward, and 2010 headliners New Found Glory.

Appearing alongside these Slam Dunk veterans will be over 40 other artists, including Mallory Knox, The King Blues, Young Guns, Spunge, As It Is, King Prawn, Qemists, Astroid Boys and The One Hundred. Nevada pop-rock act, Panic! At The Disco, will be headlining the festival’s main stage – almost 11 years on from releasing their first album.

There will also be some familiar faces from last year’s Slam Dunk, most notably, St Albans five piece, Trash Boat, who return to the festival after winning a place on the Fresh Blood Stage in 2015.

Getting the party started

With sell-out crowds and over 7 stages of live music to enjoy, any interruption in power is not an option for the organisers. Having proven their ability to rise to the challenges over the past two years, the organisers selected Templant to provide the power for the Hertfordshire leg of the festival for the third year running.

The Hertfordshire-based firm are experts in temporary event power solutions, and their generators, cabling, electrical distribution and lighting will keep the music playing and the fans dancing throughout the event. Specialist engineers and electricians will be on hand during the build up to the event to oversee the whole electrical installation process, all to ensure that the party gets started without a hitch.

And the party doesn’t stop when the festival ends – there’s the notorious Slam Dunk after-party to enjoy! The Hertfordshire festival after party will take place at The Forum at the University of Hertfordshire where three rooms of tunes and DJ sets from Slam Dunk, Face Down, Karistocat & Kamikaze Love, will entertain the music-loving crowds long into the night.

Chris Allen is the Operations Director at Templant Group, which provides generators to provide power to events all across the UK.