Cacti make landscapes more attractive and play an important role in the ecosystem. Nonetheless, these plants can present a variety of serious hazards when they start to die. They have the potential to harm other plants as well as people, pets and structures. A cactus may begin dying when insects or fungi attack it. Other potential causes include excessive sunlight, overwatering and accidental damage.

Rotting cacti benefit various pests, including scale insects. These bugs increase the vulnerability of a plant to disease. They won’t be satisfied to kill one cactus by siphoning juices from its skin. Such insects often spread to neighboring cacti and other plants within days. They are aided by a rapid reproductive cycle. A dying plant could help infest your entire property with these hungry pests.

Some small mollusks also enjoy devouring cacti. Sharp spines don’t deter snails or slugs from feeding on them. These creatures often consume the flower buds first. Cacti may begin to rot as they damage the stems. If they are allowed to infest and kill one cactus, mollusks will move to other plants on the property and cause further harm. 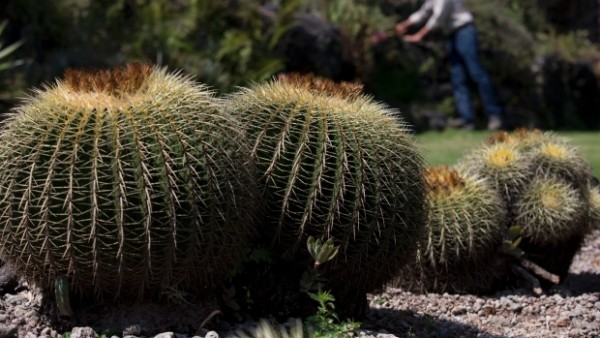 Fungi may infect a cactus and cause it to rot. The severity of a fungal infection is often hidden inside of the plant. Some people don’t notice it until the cactus has been dying for a lengthy period of time. Although it’s impossible to eliminate outdoor fungi, infected cacti increase the risk that nearby plants will suffer the same fate. Fungi release spores that travel through the air.

You could become injured while trying to remove rotten portions of a cactus. This task requires you to cut the plant with a fairly sharp blade. Different portions of the flesh may be soft or hard; this increases the risk of injury. You might need to use potentially hazardous chemicals to shield cacti from fungi or pests. Performing any work on a cactus proves dangerous because of the spines.

Some venomous creatures prefer to live in cacti that have died. One example is the brown spider. This arachnid measures about an inch long, and its brown color ranges from dark to light. The spider contains rather powerful venom. Bites can be fatal, but this is primarily only a concern for young children. Nonetheless, adults may experience serious health effects if they inadvertently come in contact with this creature.

A cactus will often turn brown as it dies. Flowers also disappear in the process. These changes might cause the plant to blend in with its surroundings. It’s not as easy to see dead cacti while walking. This increases the risk that someone will inadvertently come in contact with its spines. Possible consequences range from torn clothing to painful wounds.

A dying cactus could eventually fall over. If a person or pet happens to be in the wrong place at the wrong time, this might result in severe injuries. Sharp spines have the potential to inflict deep wounds in this situation. A large, rotten cactus could be fairly heavy as well. Falling cacti may also damage nearby structures, such as fences or sheds.

To sum it up, a dying cactus presents several serious dangers. It might make it easier for various pests, fungi and venomous spiders to invade your property. Although this isn’t particularly likely, major injuries could result if it eventually falls over. Homeowners can avoid these dangers by quickly removing such cacti or taking steps to revitalize them.

If you’re interested in tree trimming or stump removal try out Valley Tree Managers. They are a full service cactus, tree, and stump removal company who have been around for years!