Solar power is generated when the sun’s rays are converted into electricity. Solar power is a green way to produce energy because it doesn’t release any harmful pollutants. It is also cost effective and efficient because it renews itself so long as the sun rises each day. The United States is increasing its use of solar power as a way to end reliance on fossil fuels, particularly as the population grows and technology develops.

Countries around the world have committed to using solar power to reduce the harmful impact of traditional fuels on the environment. Plus, because it is free, easy to collect, and available anywhere, the hope is that solar energy will help all Americans save enormous amounts on their utility bills. Solar power is the wave of the future in America, and it is doing a lot of good. These are some of the statistics on how the US is getting behind alternative energies. 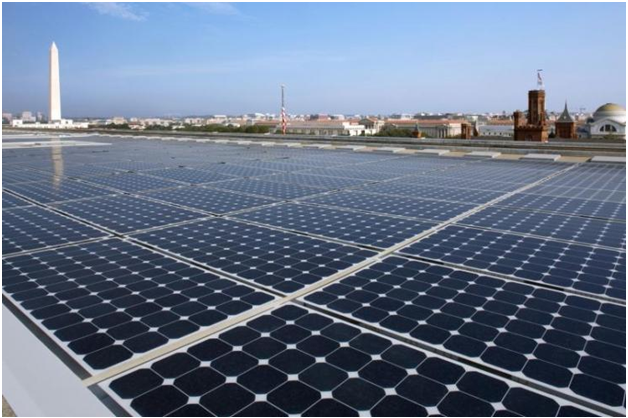 How Much Solar Energy does the US use?

In America most solar energy comes from small-scale distribution in the form ofroof-installed solar panels, though there is a greater commitment to expanding this scale to use by local utilities. Between 2014 and 2015, only not even 1% of total US electricity came from solar power. However, from January 2015 to June 2015, 39% of total electricity was generated from the sun. This sharp rise is projected to continue as popularity continues to grow.

The US is paying significant attention to ways to use renewable energy. Much of this is in the desert regions throughout the Southwest. In places like Tucson, solar power can be found on panels attached to roofs. California is another state taking advantage of the sun, particularly since they are suffering from other environmental concerns like drought.

Right now it doesn’t look like the US will rely on solar power exclusively anytime soon. But, many states are working on ways to use more renewable energy forms, particularly in areas with environmental concerns. Recent legislation in California aims to have 33% of the state’s energy come from renewable sources by 2020.

There has been growth in the use of solar panels in residential and nonresidential markets. In addition to private homes, panel installations are now popular with non-profit organizations, commercial, school, and government properties. The top five states are Hawaii, New Jersey, California, Arizona, and Massachusetts – showing how climate matters but isn’t the deciding factor in using solar power.

Municipalities and local regions committed to moving to renewable energy have experimented with large scale projects to test reliability. Both New Jersey and Southern California have tried using solar energy for everything from road signs to total home energy.

Solar power is growing within the United States. It is both more sustainable and far cheaper for the country to rely less heavily on fossil fuels. Plus, individual consumers are looking to save money on utility costs, and energy companies want to continue to serve the population. Scientists are continuing to work on ways to improve solar power and make it more efficient and effective as a daily power source.